“I extend my cordial greetings to you at the BRICS Legal Forum, which is hosted for the first time in Russia… Only through our joint efforts can we face such global challenges as proliferation of weapons of mass destruction, international terrorism and transnational crime, drug trafficking, environmental threats and manmade disasters. And only on the basis of strict observance of the rule of law,” – the telegram says.

Dmitry Medvedev underlined that the contribution of BRICS lawyers was in demand in the context of supporting large-scale investment projects, developing international financial institutions, joining efforts in the sphere of the digital economy.

The Russian Prime Minister expressed the hope that the decisions set by the Forum would contribute to the strengthening of the mutually beneficial partnership and improvement of the attractiveness of the jurisdictions of the BRICS countries. Dmitry Medvedev wished the participants of the Forum interesting discussions and fruitful work. The Prime Minister also wished the foreign participants bright impressions of their stay in Moscow and congratulated all the participants on the coming Lawyer’s day. 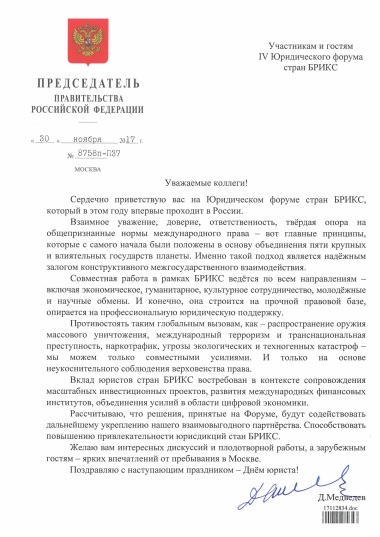